Not nearly normal-yet, …and still not yet

But when is it ever-nearly normal-will be bit,  not just yet! There always seems to be a yet, that pairs itself with “in a minute.” Two words my Grandsons thought were extremely funny when they were little.I can still remember them saying –”yea, we know in a minute that hasn’t yet happened,  so when is yet?”  I was surprised and pleased to find that yet has another meaning or colloquialism. It mains gate. For some reason that appeals  to my slightly wacked out since of humour. A gate to what?

In honour of the word yet. I just fixed the leg on my desk that has wobbled for years-irritating me beyond my normal language usage that always merit a I still haven’t fixed it yet-sigh. Well, It’s fixed-yet is now retired in the context of my desk. Now if the rest of my world would follow suite.
okay seriously-! 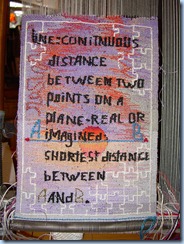 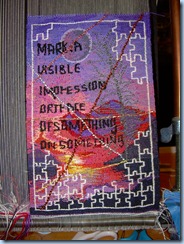 I did finish these two pieces for the small format show I wanted to enter. I am ready to start the third of the series and a fourth with a design about fire. The forth will be for a show called
Woven Together: Firestorm that is being presented in Colorado Springs. One can get a prospectus or try at www.pikespeakweavers.org/firestorm/firestorm.../Woven_Together_...
(just Google it, if all else fells) It’s about fire, commemoration, healing and the emotional turmoil of surviving, seeing and experiencing fire. I have always wanted to weave a piece about fire. When I was in Academy I was evacuated from a wildfire while on a camping trip in Eastern Oregon. The experience has always stayed with me.
It is such a beautiful day. Light clouds and warm enough to leave the studio door open. In a few hours Spencer and I will head out for a movie. The air

conditioners are out of the studio. That was 4-7 days ago-after rain, hail, rivers of water cascading off the roof, etc, etc. Such Idyll conditions for working on a roof.
My paper work is finally caught up from the trips. After 90 days without rain. We had a monsoon. My roof decided to leak-so have spent part of the week working on details for the new roof and the new solar on the house. The solar on the studio has been a great success. We have been running negative energy bills. Anything to avoid the over saturated election news and telephones asking us to get out and vote. I voted more then a week ago. Today the roof is started, supplies bought and it’s rain showers. So, the roof is partially tarped, but the good news is my part is done.
Why I warp a mirrix like I do.
1. I am lazy. I can warp the loom so much quicker with a circular warp and get

to the weaving quicker.
2. Circular warping is faster. It’s also easier to space the warps evenly on the edge that goes under or around the bottom beam. Picture from So Warped.
3. It’s easier to explain the process over the phone when I get calls from people that don’t understand the process that comes with the loom or for those who are now now the proud processors of a used mirrix loom.
4. Less prone to directional mistakes as it is warped.
5. Easier for beginning weavers and those with physical handicaps –such as shoulder problems, stiff fingers, sight problems, and directionally challenged.
6. It’s easier to correct tension problems in the warping process while weaving. Over tighten the loom, wait a few hours, preferably overnight, re-tension to the proper tension for weaving.
7. And, No, I don’t have trouble turning it around the beam. It’s actually easier. I use a batten. Loosen the tension on the loom I open a shed and put in a Navajo batten that is wider than the loom with a semi sharp edge on the fell line. Doesn’t move the warps to far apart while turning, keeps the edge of the batten on the fell line rather than opening the shed and possibly moving one part of the shed further around then the other shed-this can become a problem on a loose warp. Close the shed and turn, push, and pull the warp and piece around  to where I want the fell line to be.
8. The bars that come with mirrix loom are too fat and I loose too much weaving area by the time I bring the two sheds close enough to weave. I usually weave in 3 small bars that are an about an 8th of an inch diameter for easier spacing and holding the warp as I space it.
9. It’s a better bet when using dual duty craft and button hole twist as the warp. Less chance of mistakes and a better chance of correcting warp tension and warping with even tension as one tires during the process of winding the warp around the beams and through the spring(S).
More bits, pieces, And random  thoughts on technique
B 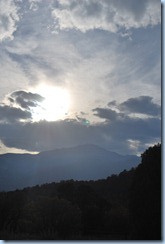 everly Weaver in one of my two classes in Co. Springs for the Pikes Peak Hand weaving Guild made me aware of another use for soumack in the design process. I teach about handiness(right or left slant) all of the time. I use it for outlining, edges, concentric circles and nested squares.and spirals etc. What I never thought about doing is using in the design process to move the eye out or in and creating 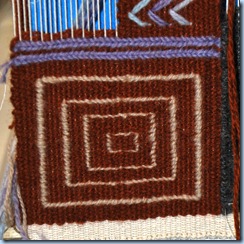 a Vasarely type of effect. The slant of the soumack turns can be used to move the eye outward or inward. By using the slant in relation ship to colour contrast-such as complements or warm and cool one can create more dimensions in the shape.
In the two pictures above Pike Peaks early morning. second photo note the slant of the soumack. Slant is called handedness and is dependent on the turn of the soumack weft  wrapper.
One can add a second element to the op effect by the colour contrast used in the ground and on the twiner-extreme would be red-green, orange to blue etc. By using warm and cool contrast or light and dark contrast the effect could be even more pronounced. 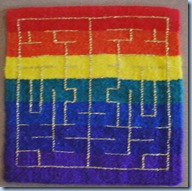 More random thoughts of Colorado Springs.
Work that done by Susan Seufer and Carole Stewart who had taken by Albuquerque class  and classes in Colorado Springs. Susan also had a piece in the Portals Small Format exhibit and catalogue.
One of the nicest surprises-  besides the wonderful people in my workshops- I had  while teaching in Colorado Springs was to

walk through a door and find two really nice 16th century Flemish Tapestries that were on loan. They were placed in

such a way they were almost impossible to photograph except for details, Baby grands lights and tables are notoriously hard to photograph around, but I did get some great details to work with. I also fell in love with the Devils Garden and it’s very thin outgrowths of rock. Sort of looked like a dinosaur or a dragon had fallen asleep leaving the spines, fins and spikes on his back at attention.

Even more Random!  OF Pig Tales and Pig Tails
I think one of the  easiest techniques for beginning and ending weft bundles can also be one of the hardest.  It’s a technique that I demonstrate over and over.  What makes it difficult is when you don’t understand hills and valleys. When your weaving hills are where the weft crosses in front of a warp thread and valley thread goes behind a warp thread- also know as hollow and full threads.

Half passes by nature  want to create a doted line- an over and under. Pigtails just want to create a wrap whether it creates an over and under trip or not.  In order to create a half pass that creates a line of dots.(remember a half pass creates dots an over and a back a complete pass always creates a line.) there are two side by side warps to consider. One warp  will always be an over and the other under. In order for the pigtail to be created on the warp you want it has to  turn around either a hill thread or a hollow thread. Sometimes it has to go behind two threads to maintain the over and under pattern of the half pass. The tail will always need to curl around  a warp and under the weft thread to get the tail to the back of the tapestry.
O yeah-the tale- the reason it’s called a pigtail-pigs used to have corkscrew type tails that curled like –well-pigs tails. I have been informed by a student that most modern pigs no longer have cork screw tails.
GEORGIA ON MY MIND!… AND, PARTS OF THE CAROLINA’S TOO-
My workshop in  Atlanta with the Chattahogee Hand weaver's Guild was fun. There is some great work that will becoming out of this group. It’s going to be interesting to see the cartoons people were working on become full fledged tapestries.  I was able to visit with John Moss and Joy Moss that are woodworkers that create the brassy bob’s that I love to use. I now have enough jpegs to create a short slide presentation of the process. Watching John make them was totally fascinating.
Tommye Scanlin and I went through  a “forced March through Georgia”gr a quote from Thomas Scanlin who introduced me to his wonderful collection of out sider art. I loved ever minute of it. In the process of the “forced march”, I saw Hambridge Retreat, John C. Campbell's Craft School,  petroglyphs, fall in the Appalachians,  Pat Williams  church kneelers(I am still laughing over the image of Gabriel's thought provoking feathers),  that was very interesting. I am now the proud  owner of a Patricia Williams tapestry-who weaves ironic funny tapestries that really appeal to my wacked out sense of humour. Tommye and Pat are also great tapestry teachers and tapestry weavers. Saw Tommye’s feather cartoon. It’s even better in person.   It was so great to talk about tapestry and design with the two of them. I leaned a lot from my students too and renewed my sense of awe in the power that tapestries can produce-Thank you “crutch lady!” I even enjoyed riding Marta with Tommye and all the breaks in conversation! Thanks Tommye1

Any way, enough for now! I have so much stuff and pictures to go through and writing to do about the last 2 months that it will take me forever to journal about it all! So random is how it is
kathe
Posted by Unknown at 6:44 PM

Thank you Kathe! I'm still processing all that I learned while you were here.

I had such a wonderful time! I am so glad we've met. Your prints were wonderful. Still haven' t smoked the hoyas, but they seem to be doing well. cheers and all.
kathe

I had such a wonderful time! I am so glad we've met. Your prints were wonderful. Still haven' t smoked the hoyas, but they seem to be doing well. cheers and all.
kathe

It was fun to see the photos from the class in Colorado Springs that I took and the one of my friend Judi from your Tennessee class. You have been busy!

I really enjoyed the class and getting to meet you. Thanks so much. 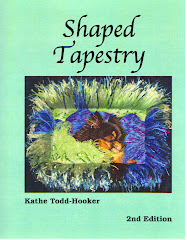 Where I am teaching and talking

If you have an interst in discussing tapestry weaving, tapestry history, tapestry conservation on an ongoing listplease feel free to contact me to join the list at kathetoddhooker@comcast.net. The list has been in existence since august 1996 and at this point has 420 members.

books i love to read for various reasons